History Made! West Downtown is Born

Whew, it’s finally done!  This is a big deal.

We’re happy to report that the City of Auburn Hills has adopted and implemented zoning changes for various properties along both sides of Auburn Road, between I-75 and the Clinton River Bridge.  As a result, an old neighborhood – now called “West Downtown” – has new hope for the future. 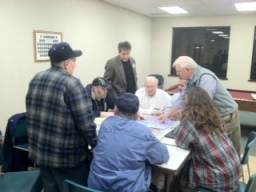 This intensive planning effort could not have been done without the help and support of the citizens in the area.  Together, we fixed a zoning problem that was 60+ years old.

Like most big things, this project started with a small story.  A story that folks like Russell Moore and many others wanted us to know.

You see the situation was not ideal.  The neighborhood was “non-conforming” with our zoning laws and master planned “to go away.”  The old vision was to tear down all the homes in the area and redevelop the land into an industrial park or a strip mall, but over the years the plan never materialized.  Since this did not occur, property owners were left with non-conforming homes that they could not improve due to zoning rules.  Some homes were falling into disrepair.  Mr. Moore and others told us that things needed to change.  We agreed.

So after over one year of study, a new plan (view) was adopted by the Planning Commission in June and zoning changes (view) were approved by the City Council this past Monday night.   The process was a lot of hard work, but so worth it.

The new master plan and rezoning will protect these good quality homes, mostly built between 1930-1945.  It will make them legally conforming with the Zoning Ordinance and allow property owners to reinvest and/or refinance.

It’s a committment to the neighborhood by both the citizens and the City – a true partnership.

In typical Auburn Hills’ fashion, we did this together as a team.  Pretty cool.