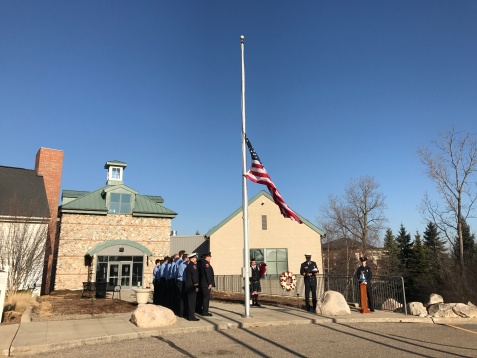 On February 27, 1994, Auburn Hills Firefighter Dennis Dearing Jr. responded to a fire call which would be his last.  Dennis made the ultimate sacrifice that day and lost his life while in the service of this community.  Each year, our Fire Department pays tribute to Firefighter Dearing on the anniversary of his death.  Today, unlike many past memorials held on February 27th, the sun was shining and the tribute was exceptionally beautiful.  Chief Manning delivered some powerful remarks and we were honored to be joined by some of our neighboring fire departments, namely Rochester, Rochester Hills, Oakland Township, and Waterford Township.  Dennis’s son Tyler, now a newly sworn-in Police Officer with the Birmingham Police Department, was also in attendance.  The Auburn Hills community will be forever grateful for the service of Dennis Dearing Jr. and our continued thoughts and prayers go out to his family.