A Fish Story … You’ll Have To See To Believe!

It’s April 9th and well past April Fools’ Day, so you might be more inclined to believe my “fish story.”

Well, there are some big fish swimming in the Clinton River right now, and they happen to be residing in the City of Auburn Hills.  How could I be so sure this news is no joke?  The Michigan Department of Natural Resources (MDNR) Fisheries Division were rotating out brown and rainbow trout from their hatchery broodstock program and decided to release the adult trout on March 26th at Riverside Park in Downtown Auburn Hills.  We have photos!

If you’re a regular reader of this blog, you’ll know that Riverside Park is one of the MDNR’s stocking locations along the Clinton River because the City offers a number of locations where anglers can fish from the bank or enter the waters.  Riverside Park and River Woods Park are the two most popular parks where you might see someone cast a line into the water in hopes of catching a fish or two.

For those looking for more specifics a total of 672 brown and rainbow trout averaging 19 inches (almost two feet long) were released into the river.  This is only the second time the MDNR has released adult trout into the river. 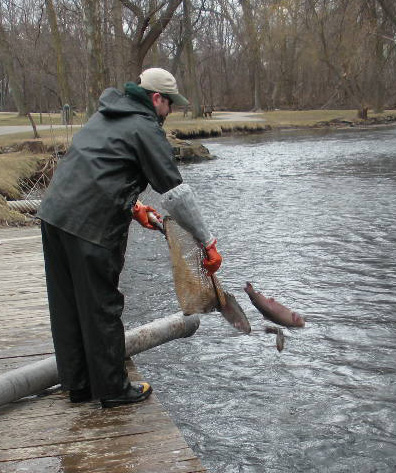 So, if fishing happens to be one of your favorite past times, and you don’t want to take a three-hour drive up north to the Au Sable River, why not test your skills right here in Downtown Auburn Hills.  Thank you, MDNR Fisheries Division!