Here in Auburn Hills, the Department of Public Works (DPW) is made up of just over 40 full-time positions, 4 part-time positions, and 20 seasonal positions. Core services provided include management and maintenance of fleet, water and sewer, municipal properties, public utilities, and roads.

In honor of National Public Works week, we sat down with few of our DPW staff to learn more about what they do, as well as, learn about the work that went into the development of the new Auburn Hills sign.

Amidst all of the construction happening in our city, you may have noticed a new charcoal brick sign sporting our new Auburn Hills logo on Hamlin Road. While a sign may not seem like a big deal, it has been quite a journey with the development of it and many of us would have not thought that would have fallen under the wheel house of public works. This sketch idea on a paper napkin was brought to life by a team of amazing people. Below we share a little about the men behind the Auburn Hills sign. 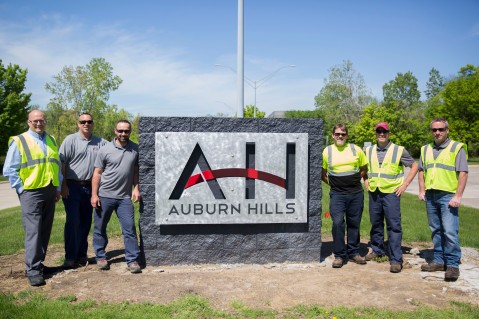 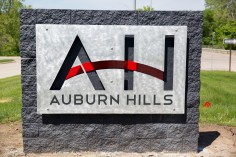 Steven DeVos, your Friendly Neighborhood Electrician
Steven maintains all of the electrical here in the city. He oversees 35 buildings and around 900 street lights. Everything that uses electricity within the city, Steven and his trusty side-kick, Terry, handles. From fallen down light poles to handling the electrical communications, it’s done by them. When things fail, they are the first to respond. Steven shared that he actually got into this line of work by accident but has enjoyed being able to work with his hands, be outside, and that each day is different from the next. He was brought in to the new sign project to work with Don Grice, our Assistant City Manager, to conceptualize the design and different ways we could have it illuminated as residents drove by. He shared with us that their goal is to have 4 out of the 5 new signs be solar powered at the end of the project.

Terry Barnett, the Jack of All Trades
Father of a custom home building contractor, Terry started working for the city in grounds maintenance and has worked his way up to electrical work as Steven’s apprentice. He is currently finishing up online electrical school at Penn Foster College. “I like being able to create something,” Barnett said. He shared that whether it was concrete, masonry, carpentry, or electrical work, he wanted to work with his hands. Prior to working with the city, he worked in the private sector until his brother-in-law Tim, who also works for DPW, influenced him to come work with the city. Some of Terry’s work can be seen around the city such as, the Arrowhead Grill sign, the wall of the DPW conference room, and now the crisp, clean brick laid down for the new Auburn Hills sign.

Tim Wisser, Facilities Crew Leader
Known as “the man who wears a superhero cape” by his DPW buddies, Tim has been with the city for about 11 years. Similar to Steven, Tim handles and maintains the cities 35 buildings. Work can range from moving office equipment to updating roofing, and much more. Anything you need done, Tim’s on it. While this goes for all of our DPW staff, it holds very true for Tim. “What’s most important to me is serving others and being able to leave my mark on the community,” Tim said. With the Auburn Hills sign project, he handled the painting of the stone pieces.

Dave Slater, Road Supervisor
A veteran at DPW, Dave has been with the city for about 23 years. He started out at the Fire Department in 1991 and while there, started working with public works because he enjoyed the variety of things he could do while also serving the public. He currently maintains 180 lane miles within Auburn Hills. From pot holes, snow removal, patch filling, street sweeping, and traffic control, Dave manages. He also maintains around 3,000 sign posts in the city which includes reflective testing. His influence with the sign starts at the beginning. Dave worked closely with Don to understand the look and feel of the sign, as well as the material to create it.

Jason Beckman, Sign Master/ “Liquid Chef” or Chemist
Another veteran at DPW, Jason started with the city 22 years ago at the Fire Department and in custodial work. From there, he worked on roads, grounds maintenance, and fleet. Now he holds two very popular titles: The “Liquid Chef” or Chemist for making the paint for roads and parking lots, and the Sign Master where he makes any unique sign a department may need. Jason also worked on the new sign concepts, specifically the aluminum outline of the “AH”.

This was a huge team effort and a lot of work went into what looks to be an ordinary sign (approximately 105 hours). We are very grateful to have a team that is passionate about the work that they do and we at the city want to celebrate their incredible work.

Want to learn more about what our Department of Public Works does? Subscribe to Inside Auburn Hills to follow our DPW series!